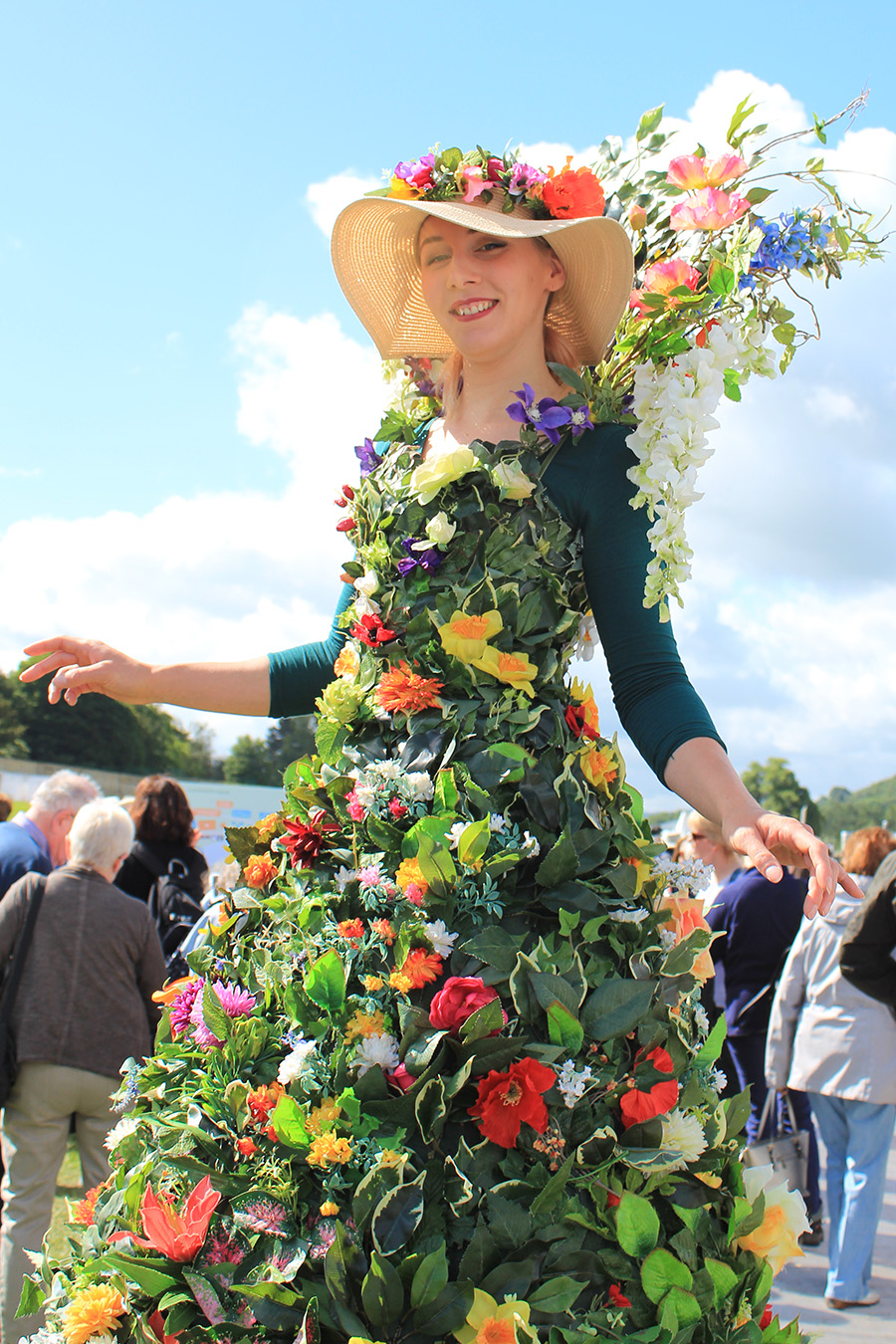 Tickets for the RHS Chatsworth Flower Show 2017 had all but sold out the last time we checked so it’s a good job we booked early.

Being the first RHS Show at Chatsworth we didn’t know what to expect except for the few sneak peeks that had been carefully chosen for release to the media. The inflatable Joseph Paxton Conservatory was one of them as were the new free-form gardens. These were not judged but did allow the designers much more scope to express themselves than the traditional RHS garden classes. 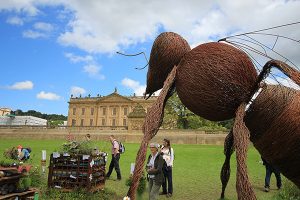 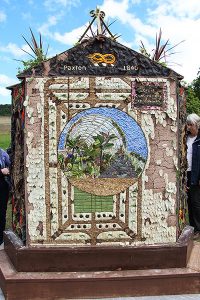 The RHS On Tour at Chatsworth

Getting to the event was easy. So, OK we live just a few miles away so the journey wasn’t a long one. That said without careful direction of traffic the roads around Chatsworth can get dreadfully busy on event days. We passed Chatsworth on The Thursday (8th June) and attended the show on Friday (9th June). On both occasions we passed the Gates at the Baslow end of the estate at around 09:30 and found the traffic flowing reasonably well. The evening before we attended the organisers sent an email asking people to stagger their arrival and informing everyone the gates would be open from 08:30. This seems to have helped because on the day we attended traffic was lighter than the previous day.

Stewarding at the event was very professional. And it needed to be. Despite barriers and obvious walkways from the carpark pedestrians seemed determined to make their own way across roads with no heed to cars and coaches dropping off near the house. I heard one visitor describe a steward as a “Little Hitler” and then ignore him, walking straight to where she wanted to be. Throughout this the stewards were polite and helpful to us.

We were greeted before entry by a pair of stilt walkers in floral costumes. One of whom is pictured here. Nice touch.

Signage on the site was a little light in the show area, maybe to help sales of the programme. It was however difficult to get lost, but without a programme you just had to criss-cross the site to discover the different areas.

The RHS Chatsworth Flower Show 2017 looks to have been pretty much a sell-out on the day we attended. The crowds were heaving even from the time of our arrival.Â  Because the River Derwent cuts the site in two the organisers had erected three bridges to allow movement of pedestrians. These were real pinch-points and required stewarding to ensure the thousands of visitors queued in a generally orderly fashion to cross. One bridge exit led immediately into an avenue of stalls. Despite there being space for visitors to step off the metal walkway onto the grass and view the trader’s ware the moist conditions meant they tended not to. This blocked the bridge and was the main cause of the bottleneck. Wide walkways at this point next year perhaps.

The show gardens are featured in some of the images below. I have to say we were expecting more of them, perhaps our expectations have been raised by other RHS shows. So being the Chatsworth Flower Show’s first year maybe we’re asking a lot. There were some interesting designs, some we liked, others not so much. Of course we all have our own views of what represents a beautiful and practical garden. What everyone has in common is playing the “I wouldn’t have given that a Gold” and “That deserved more than a Bronze” game where you become an RHS judge for a few hours. LOL

Chatsworth House and its estate is a fantastic place to display sculpture. Some of the large sculptural pieces were great fun. Several having a message about our impact on wildlife both as gardeners and in our wider daily lives. 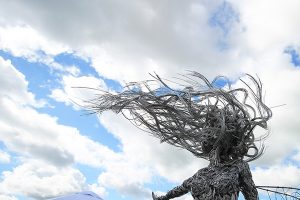 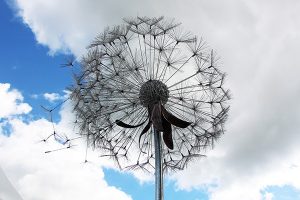 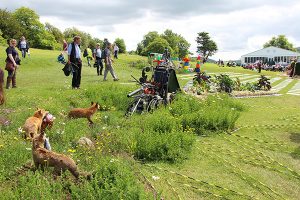 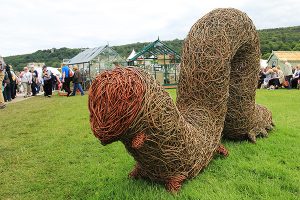 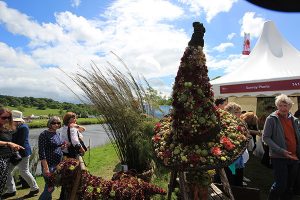 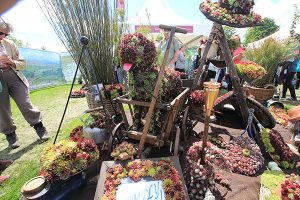 Dog in A Cart 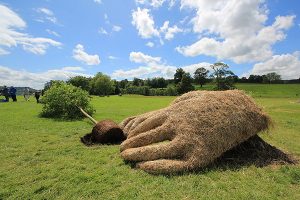 Plant sales were brisk. As you might imagine I left with an empty wallet and hands full of plants. The car smelled great on the way home from the roses we bought. One problem I did have was paying using a card. At times the card machines refused to connect to a network and rejected my card. In other places the cards went through fine. I guess each store was using its own payment solution with each fighting for a mobile signal. This did slow down transactions and make it necessary for me to pay in cash more than I’d have liked. There were a number of cash machines on-site to mitigate this problem somewhat.

As you’ll have gathered we found a lot to buy in terms of plants. If you’re looking for other items for your garden from furniture to greenhouses, sculpture to summer houses they were there too. Local artisans from the Peak District and surrounding areas had a presence as well. It’ll be interesting to see if the huge footfall they experienced versus what I imagine was a hefty rent translates into sales and therefore profit for them. 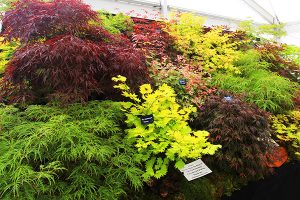 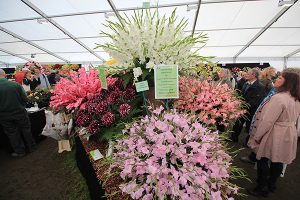 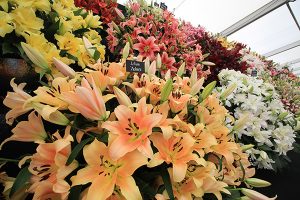 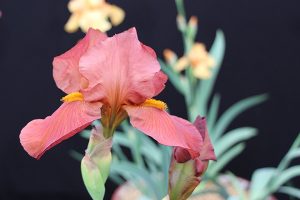 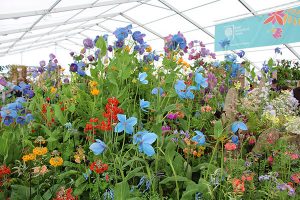 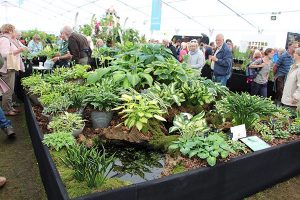 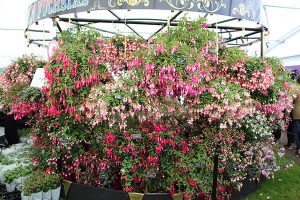 Experience Peak District presented a show garden, featuring Gold, Silver and Bronze cows. No sheep that I could spot mind. The garden was designed by Lee Bestall and built by JPH Landscapes.

The inflatable Paxton Conservatory was one of the aspects of the show we were intrigued by. It’s big, it’s impressive and it has a wired mossy skeletal structure hung from the centre with a glitter ball. What was that all about? As for the planting on the floor of the conservatory – it was OK. The bananas were there, I mean you couldn’t have a greenhouse at Chatsworth without a Cavendish banana. Beyond that we both felt a bit “meh”, when we expected “Wow!”. The model of the old conservatory was nice though. 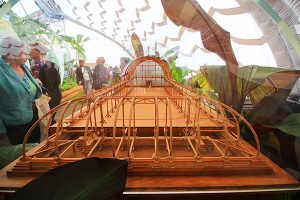 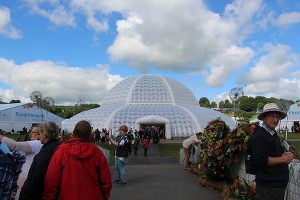 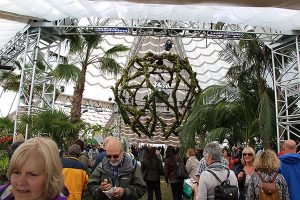 The inaugural year of the RHS Chatsworth Flower Show was, overall a success. There were a number of issues that I’m sure will be addressed next year:

Don’t let all this put you off. We thoroughly enjoyed ourselves and as the Duke of Devonshire said on TV last night they’ll be refining the show for 2018. And one thing that The Chatsworth Estate does have above any other venue for an RHS flower show is the beautiful Chatsworth House and incomparable Capability Brown gardens as a backdrop.

Disclosure – We paid full price to enter RHS Chatsworth and received nothing in return for this review, Click here for more information about reviews