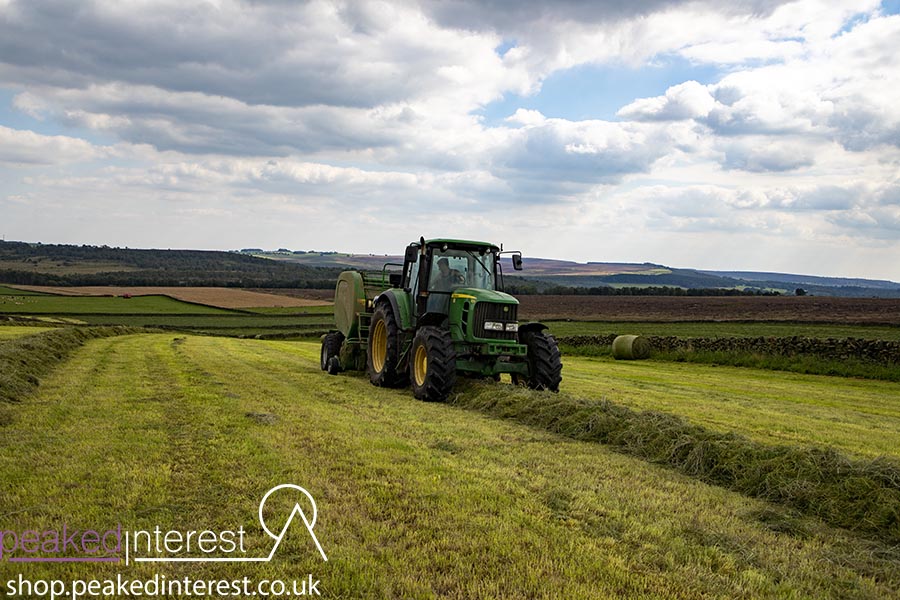 When you live in the countryside you tend to become attuned to the changing seasons, watching the fauna and flora adjust to the length of days and the weather. We aren’t amongst the many stewards of our outside spaces, but even as someone who is simply lucky enough to live in the Peak District National Park it’s impossible for us not to notice the changing seasons.

Nature itself drives this eternal cycle of growth, fruitfulness and resting over winter ready for the burst of new life in the spring. That’s what we’re looking forward to right now, in six month’s time when the first green shoots begin to emerge and the sound of lambs greets us every morning.

Winter can be an icy, wet and sometimes bleak time out here. Though climate change seems to have softened the once bitterly cold Januaries and deep drifts of snow that everyone in the UK was once familiar with. Winter is not a time for hiding indoors and ignoring the natural world,  for those of us lucky enough to be able to enjoy it the landscape wears its sometimes desolate winter clothes like a beautiful ice queen when the frost and snow does bite. But for those who work the land autumn and winter are not times to be idle. If they and their animals are to survive the winter, autumn is a time for harvest and preparation, winter a time to safeguard and look after the animals in their care.

The days are shortening noticeably now, we are no longer able to see the barn owl who flies past our window at 9:15 every evening. Our eyes are not acute enough to pick her out as she silently glides between the trees outside our window. She’s still there, hunting, the occasional shrieking call giving her away.

Now is the time of year to bring in the bounty that’s been growing in the fields over the summer months. In an area like the Peak District hill farming prevails over arable. That means cattle and a lot of sheep who are able to make the most of the hilly terrain and survive the winter storms. Even those specially selected and bred animals need more than the land can offer in the dark months either side of the turn of the year can offer.

That’s why you’ll see farmers all over the Peaks collecting straw and silage and storing food for their animals to eat when the dormant plants on the hillsides can’t provide sustenance.

We popped over to see the silage being baled and barley being harvested a couple of days ago at a local farm.

The Science Part (Indulge me please)

If you were wondering what silage is and wonder why silage is fed instead of hay, or even why there’s something else called haylage – I’ll try and explain.

Hay is the traditional way of storing feed for winter. When grass is cut in a hay meadow its moisture content can be up to 80%. Stack this in a barn and all you’ll get is a slimy pile of rotten grass after a few weeks. That’s why grass for hay is dried until the moisture content is less than around 12%. More than 12% and the hay can spoil, or even rot with such vigour that the heat produced may cause bales to spontaneously combust. Properly dried grass will keep safely in your barn until your stock are ready to eat it.

Silage on the other hand is preserved by preventing the growth of the bacteria that can spoil your hay or cause it to catch fire. Sealed in plastic wrapping or in a large, airtight covered pit silage has a moisture content of around 40%, this water content and exclusion of air means the grass actually ferments rather than rots. Exactly the same process that produces beer – the conversion of starches to other chemicals including ethanol (alcohol) and lactic acids. This leads to a decrease in pH, that is the feed becomes slightly acidic. The whole process takes up to three weeks, so silage isn’t fed to stock until then.

Of course if your big wound bale of silage has its bag pierced air can enter, and then you run the risk of the bale spoiling or even catching file. Holes in the wrapping of bales, dead animals such as mice finding their way into the silage or even animal droppings can cause the bale to spoil making it harmful to stock animals.

In other words please don’t climb on silage bales. Compromising the airtight seal on bales can mean that in just a few days 600kg of feed can be ruined, or if the spoilage isn’t noticed animals can be harmed by anything from ingesting spores to botulism

As anyone who gardens will know a lot of work goes in to growing your own food but the rewards are worth it. Eating something you have grown yourself isn’t just a way of saving money on increasingly expensive fresh produce but it feels good […]

We walked up to the summit of Mam Tor today. Some of the images from that short walk are below. Beautiful as they are don;t be fooled into thinking you can trot up there at a moment’s notice. Today for example the wind was up […]

Galleries, Peak District Walks, Walking
-
by Carol
Highland Cattle on Baslow Edge The Inside Out Story
Contact Us Here: enquiries@peakedinterest.co.uk