On A Wick And A Prayer 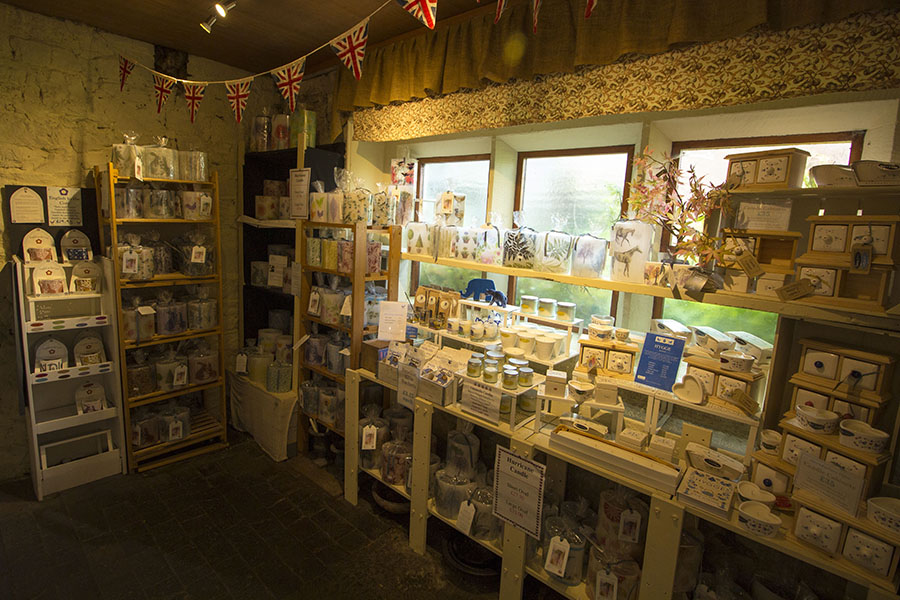 In a quiet corner on the outskirts of the sleepy village of Tissington is a blacksmiths forge which is both the home and business of Annie Maudling and her husband. On A Wick & A Prayer creates an extensive range of fragrant candles. You can smell the fragrances as you approach the On a Wick and A Prayer workshop and showroom up the driveway, via the free-range chickens.

Annie is a self-taught candle maker who has run a successful business for over 15 years now.

The idea for the business coalesced following a fishing trip to Ireland. They were staying on the West coast near to a candle maker. On the ferry trip home whilst clutching a handful of candles she thought “I want to have a go at that”.

Annie started to experiment with her daughter’s candle making kit and things took off from there. She located a candle maker’s supplies and took home wax, wicks and fragrances and spent the next couple of months trying out ideas in her kitchen.

The business was started up in an old pig sty in the garden. A sign was placed in the garden inviting people to have a look round and On a Wick & A Prayer was born. Annie attended a fair selling her fragrant candles which were a success, encouraging her to continue with the business.

At the time the village had very little attraction for the visiting public there was no shop or gift shop. A couple of Annie’s friends offered to help out with production, so now there was a team of 3. As a result of the increase in staff it was decided production should be moved in to the garage, which used to be where the horses were kept and the pig sty was used as the shop.

The adjacent building which was being utilised to house a couple of the neighbours cars became available and the business was expanded. Business was challenged when a large supplier approached them to produce for them, unfortunately the numbers they required exceeded the company’s abilities to keep up with demand. 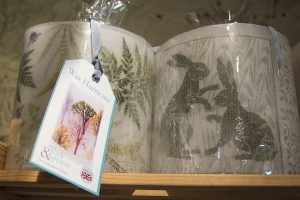 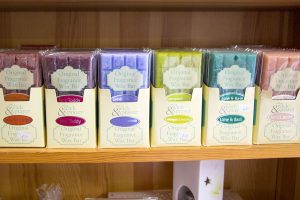 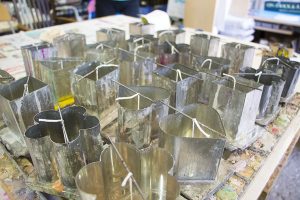 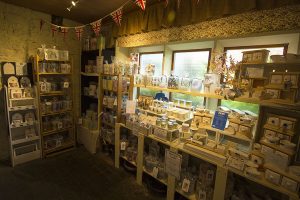 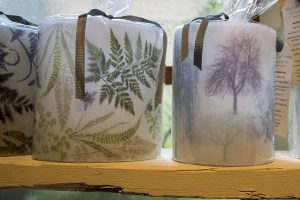 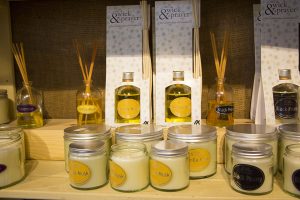 Despite this catch 22 situation, the company had gained such a reputation for being different that they secured contracts with other suppliers. This demand required more space so briefly they set up at Ashbourne and then moved to their current premises which are based in nearby Dovedale.

Over the time that Annie has been creating candles she has trained about 15 people but currently has around 9 working with her. (at the time of this being written)

Annie was toying with the idea of acquiring a potters wheel for a while but resources were being fed back in to the original business. Then about 3 years ago they got 3 kilns and now decorate and glaze bought in pieces with their distinctive designs.

Annie also moved in to the world of recycling 12 years ago long before it became the thing to do. She noticed whilst holidaying in Cornwall that the tops of wine bottles were being appropriated to make wine glasses. She enquired what happened to the bases and discovered that they were discarded.

The bases made great containers for the wax candles and a new product line was born. These were also refillable, continuing the line of recycling. Unfortunately, given the time, pre internet the whole concept wasn’t as big a hit as it could have been.

Now the concept of refillable candles lives on in new ways. They have a beautifully glazed bathtub which houses fragranced wax and is refillable along with a range of glass burners which can be used inside and outside. The glaze on their pottery is called a “Frip” glaze because it bursts in the kiln, creating a unique finish for all the products in the line. The original blue & green colours reflect those of Dovedale. This pottery is now also available in grey.

Uniquely, they also have a hurricane lantern which is housed in a specially created glossy, translucent wax with inlaid flowers & designs which houses a tealight. So they can withstand frost outside in the garden if you place them of your patio.

Do pop in and have a look around the myriad of wonderful candles at On A Wick & A Prayer in Tissington next time you visit and keep up to date by subscribing to their monthly Newsletter with the latest lines and offers. You can be assured with 27 different fragrances you are sure to have plenty to choose from.

Filed Under: Local Businesses, Points of Interest, Slider Posts, Uncategorised
Tags: candles, on a wick and a prayer, tissington, wick and a prayer
Snow on Derwent Edge
In Search of Higland Cattle on Baslow Edge 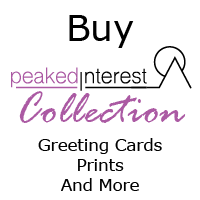